NIGHTMARE VAN INTERVIEW WITH WILL ROSENSTOCK 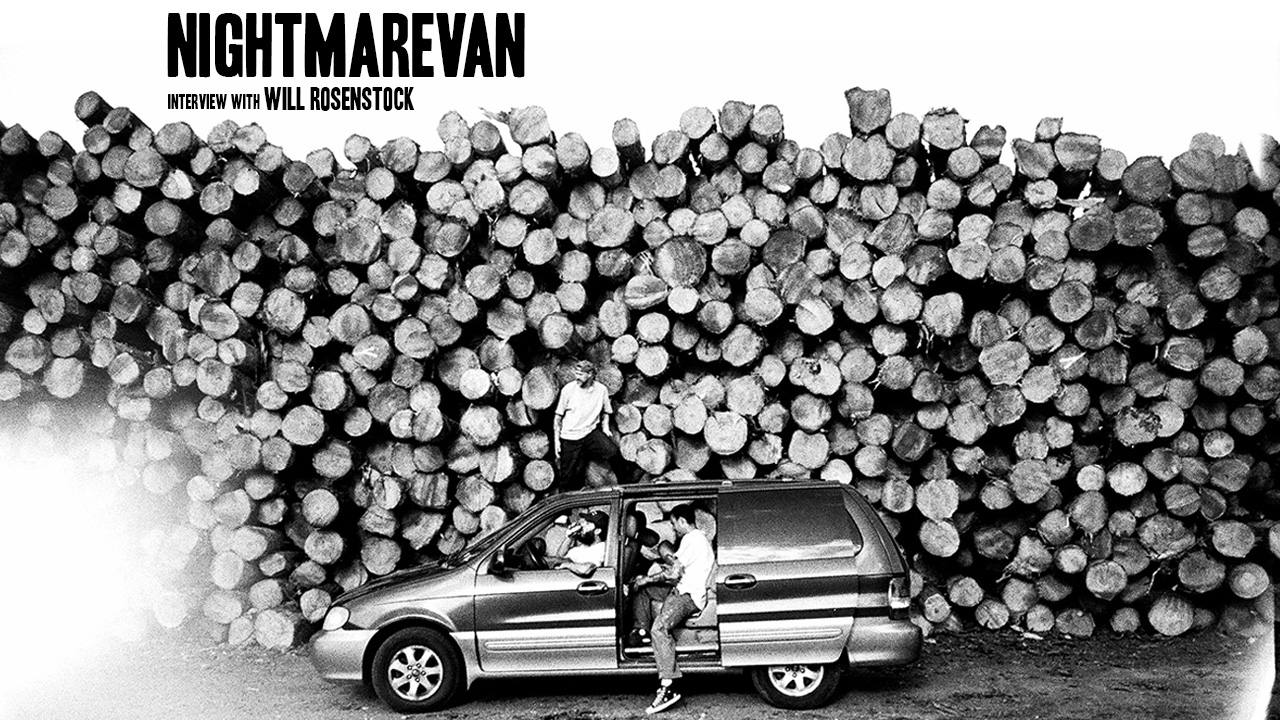 Smashed parking gates, anarchy in the theaters, laughing until you cry and an afterparty so good the cops had to shut it down twice, with a video named Nightmare Van would you expect anything less?

Following the premiere of the newest video release from Richmond, VA’s Bust Crew, we caught up with the man behind the camera, Will Rosenstock to hear all about their latest offering. 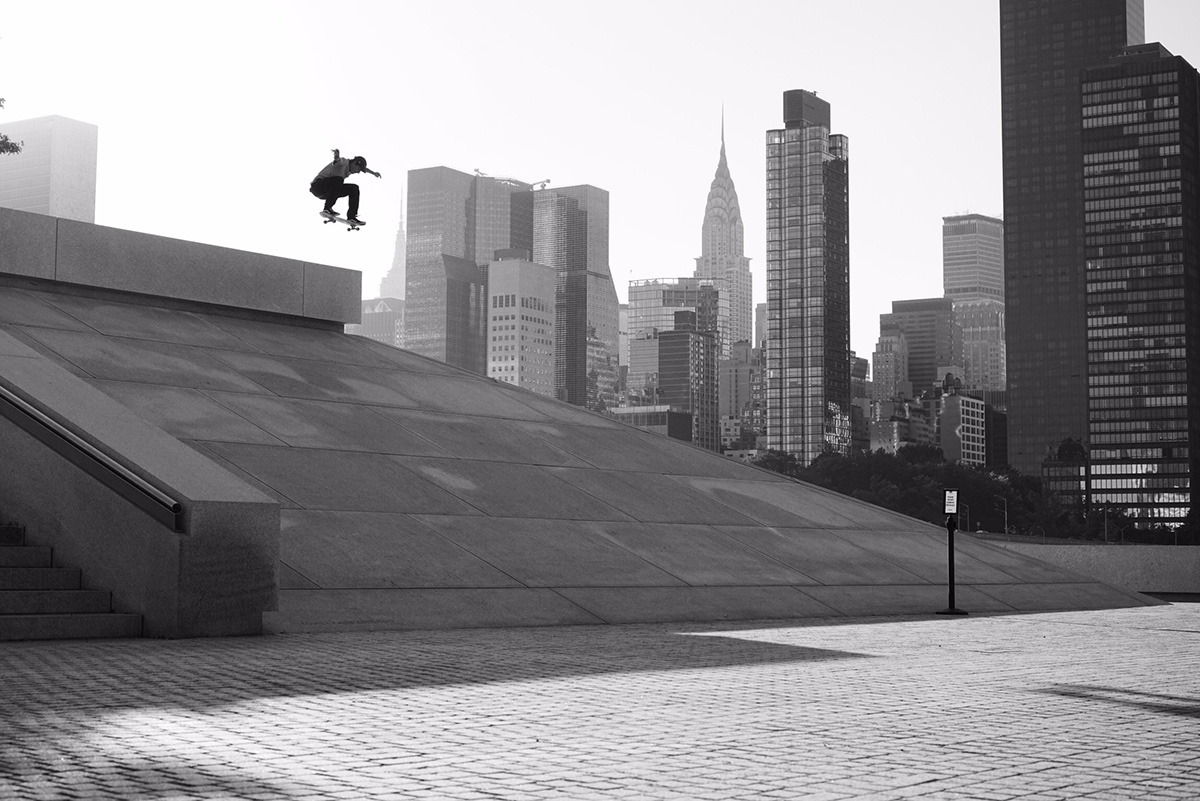 How’d the premiere go? Was it everything you hoped for? Anything out of the ordinary?

The premiere went really well, the turn out was amazing. A bunch of people from out of town came through which made it even more fun. It was definitely everything we could have asked for. Nothing really out of the ordinary happened, but we had an after-party at a local DIY spot and set a bunch of stuff on fire while my friend DJ-ed. Eventually the cops came and kicked us out. After that, we moved the party to my friend Zander’s house down the street. Jake Johnson was there, and if I remember correctly he bought a bunch of pizzas for everyone at one point. Then the same cops came and kicked us out of there too. It was a fun night. The next day we got a huge squad of maybe like 40 people to buy tubes and float down the James River together, that was actually the highlight of the weekend for me. 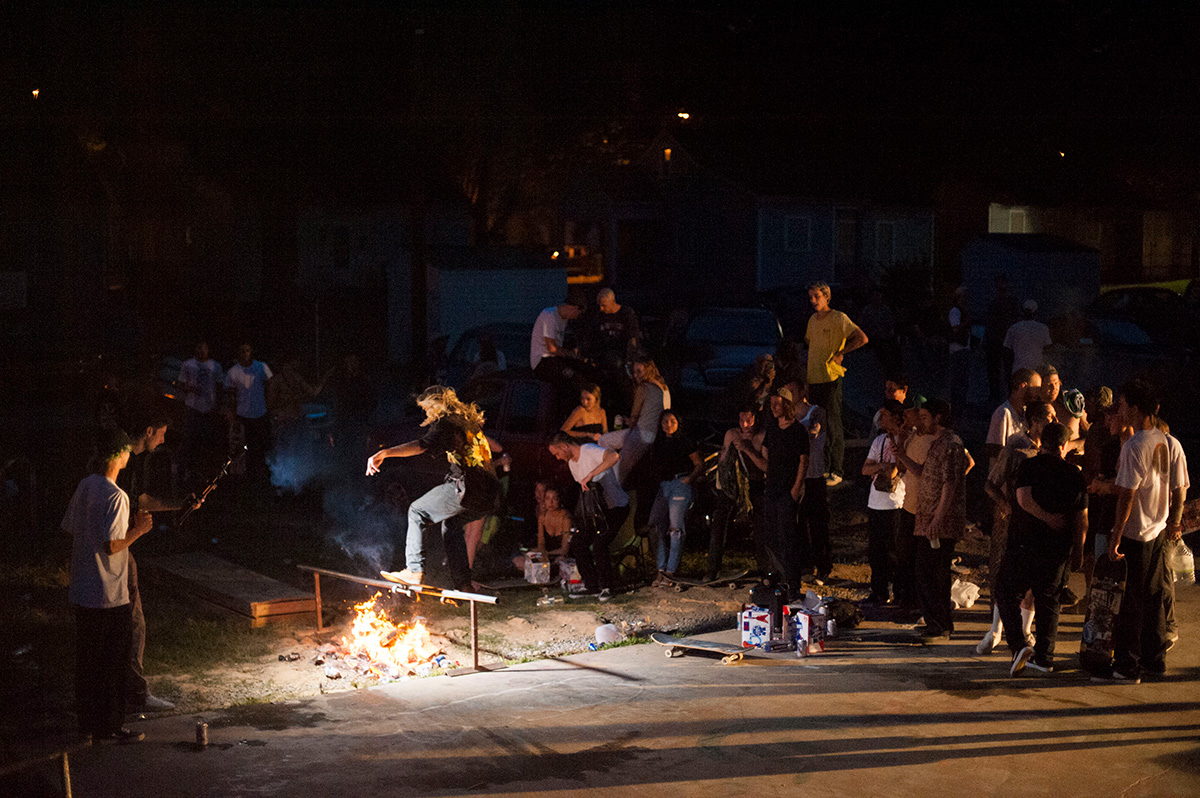 What’s an after-party without fire and a visit from the cops. Photo: Nick Ghobashi

That sounds pretty epic, is that about on par for a Bust Crew premiere, where does this one rank for you in comparison to past premieres?

This was definitely my favorite one we’ve done. The after-party really sealed the deal. 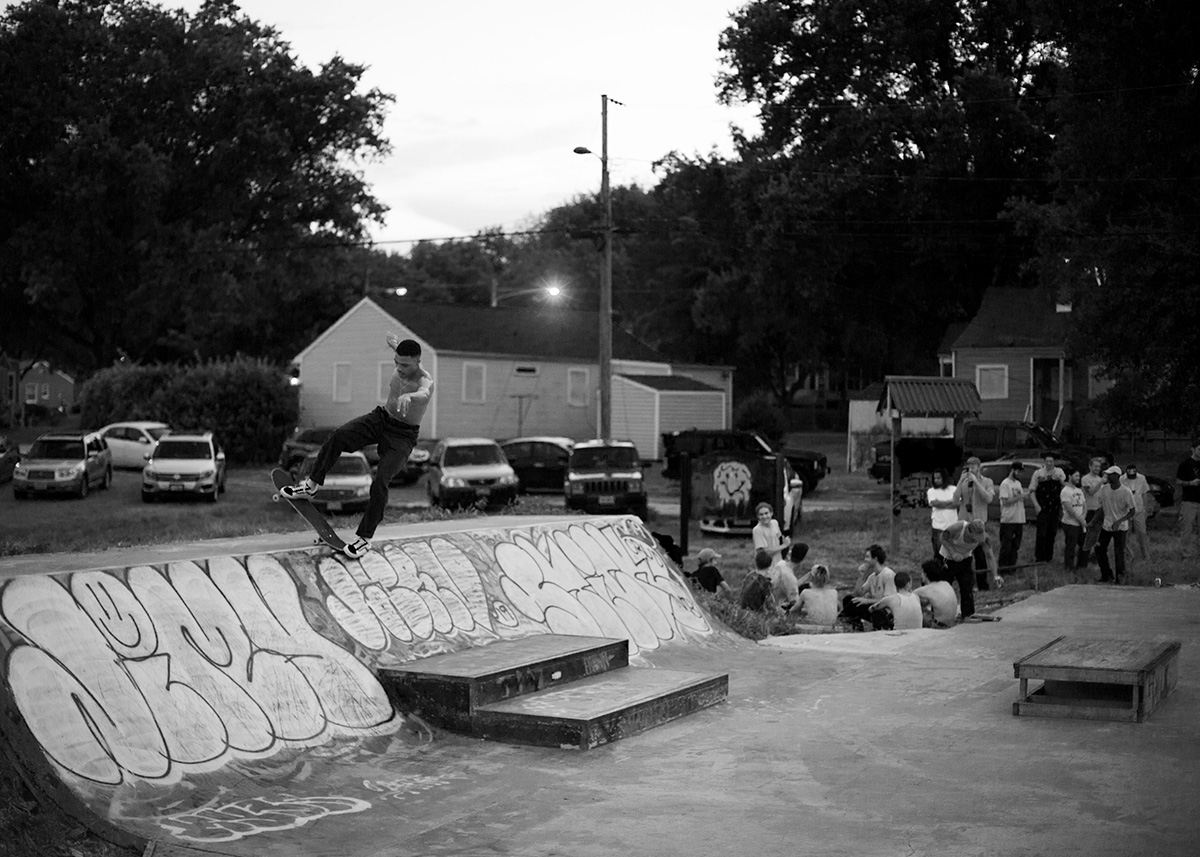 Best premiere was a midnight showing of my friend Mike Butler’s video called Double Dragon. Everyone was drinking forties and smoking weed in the theatre and mind you this was like ten years ago and in Virginia so it was extra illegal. That was the first and last midnight premiere. The worst thing that happened was probably at this recent premiere a kid slapped the owner of the theatre in the face because he wouldn’t let him in with an open container and I thought for sure he ruined videos there forever, but thankfully the owner was cool about it all. 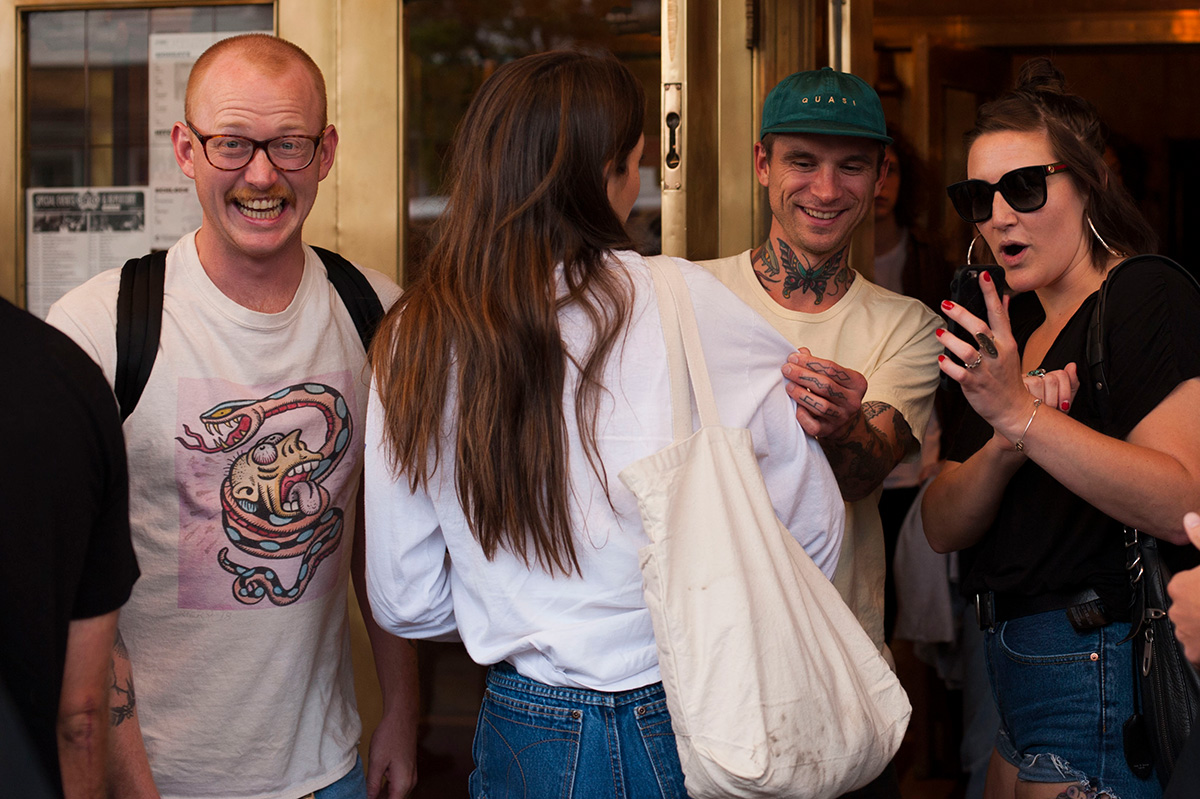 Not really sure what’s going on here, but everyone seems stoked for the premiere. Photo: Nick Ghobashi

How would you describe the Bust Crew to someone who has never heard of you guys or seen your videos?

We go out of town every Sunday to film from like 8 AM until 10 PM ish to surrounding cities and states like DC, Baltimore, North Carolina or even random little hick towns in VA that maybe have one and a half to two spots total. Sometimes it works out great and other times it’s way more miserable than its worth, but that’s part of the deal. We also eat Taco Bell every Sunday and laugh until we cry on the rides home, its tradition. Cheesy bean and rice burrito, two spicy potato tacos, and a triple-layer nacho. 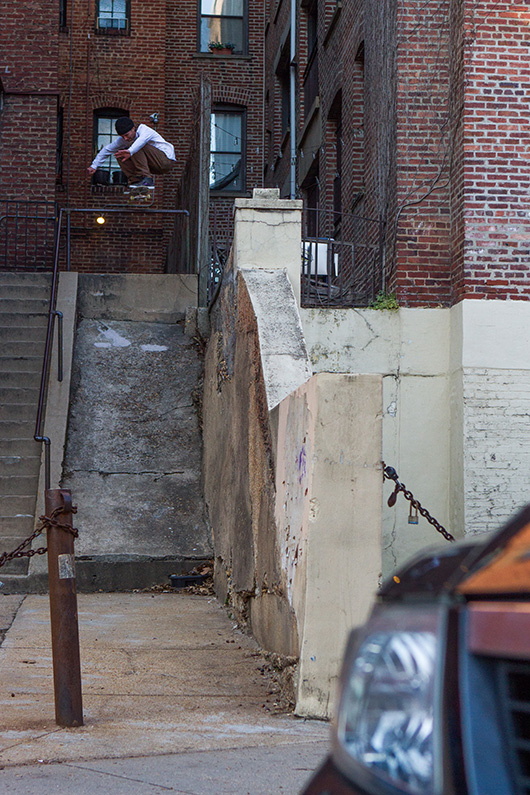 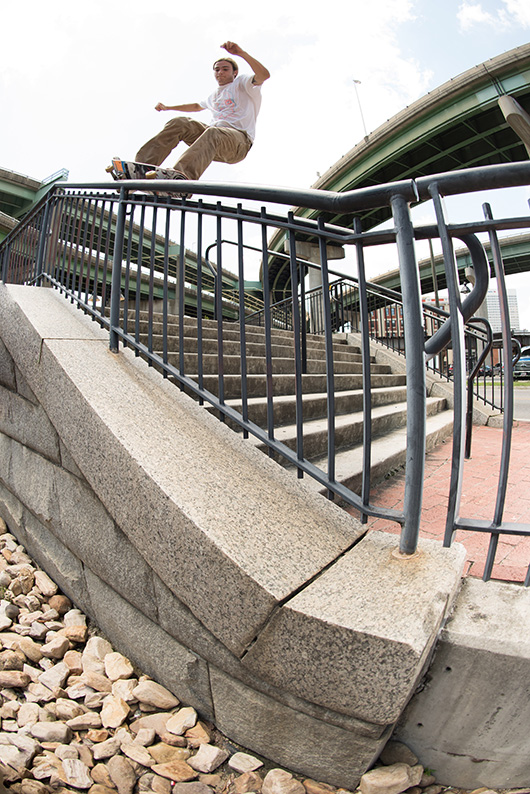 Correct me if I’m wrong, but I remember hearing that a lot of the guys in the Bust Crew who film for your videos also work full-time jobs. Is there truth to that? What percentage of the skaters in the video work full time?

Yeah the majority of them work full time, and the ones that work part-time still have pretty strenuous jobs. For the most part, none of them are worried about trying to skate for a living we’re laying low in Virginia and making videos. 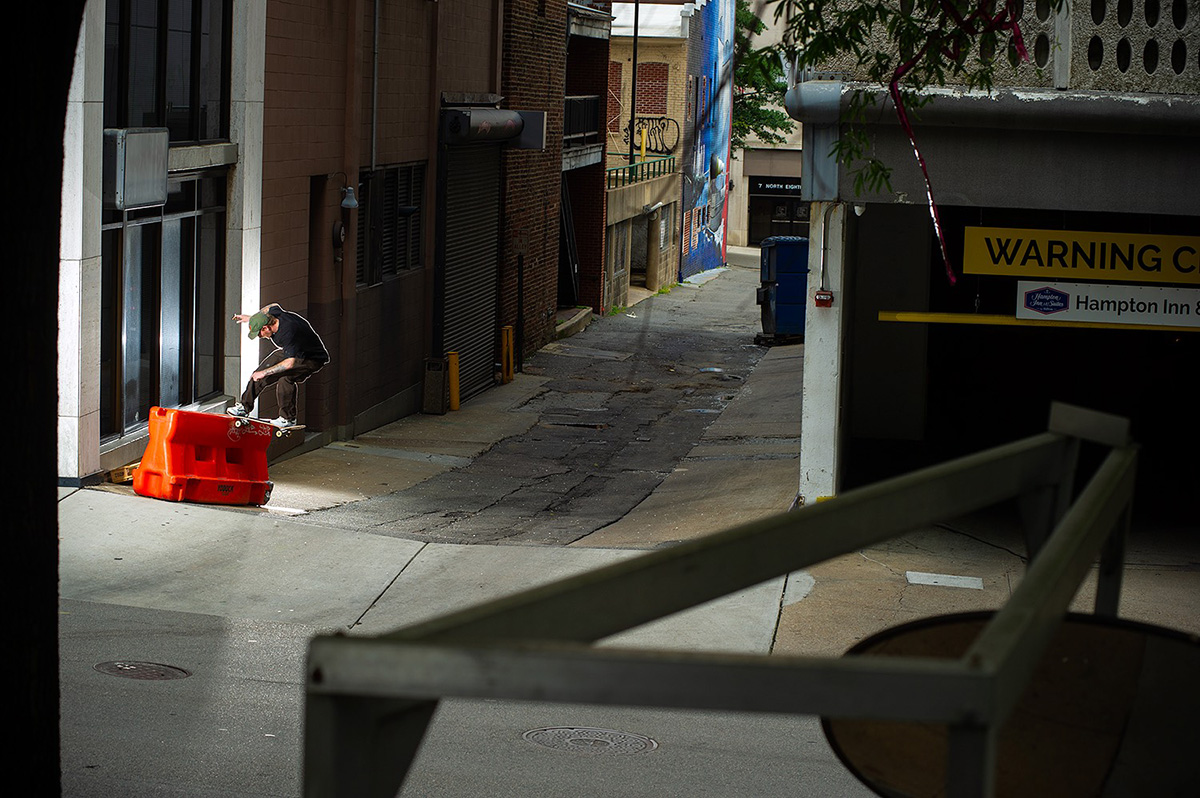 What sort of strenuous are we talking? Who in the crew works/skates the most?

I mean Jon and Ty both work construction renovating houses and what not and Pat B was doing HVAC for a long time and now landscaping and school. I can’t imagine being on my hands and knees all day or shimmying around in a fucking crawl space and then getting off work and still wanting to skate, but they do. Jon skates the most. 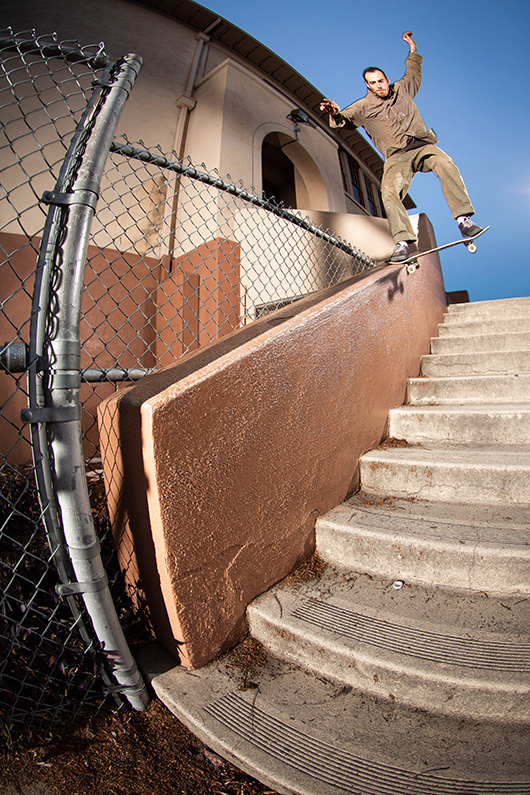 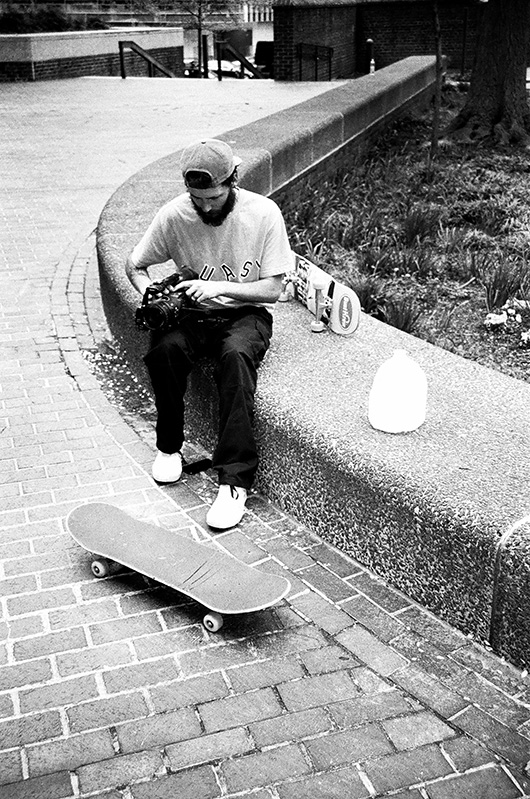 What’s your guy’s filming schedule usually look like? As the filmer are you in charge of motivation or are they the ones dragging you out in the middle of the night to light stuff up.

We all motivate each other at different times, I have definitely dragged them out when they don’t really want to be out, and they do the same to me, but we all love it regardless. I love lighting up spots.

I personally think the local video or skate shop video and the premieres that go along with them are one of the most important traditions in skateboarding, I imagine as a filmer it holds a special place in your heart as well. Do you think they will continue to live on? Why or why not?

I have no idea how long it will last, but as long as I’m making videos I’ll premier them at Venue or the theatre right next door. I love seeing Venue (our skate shop) packed on premiere days. Full-length local videos have definitely made a comeback and I think they’ll be around for a while at least I hope. 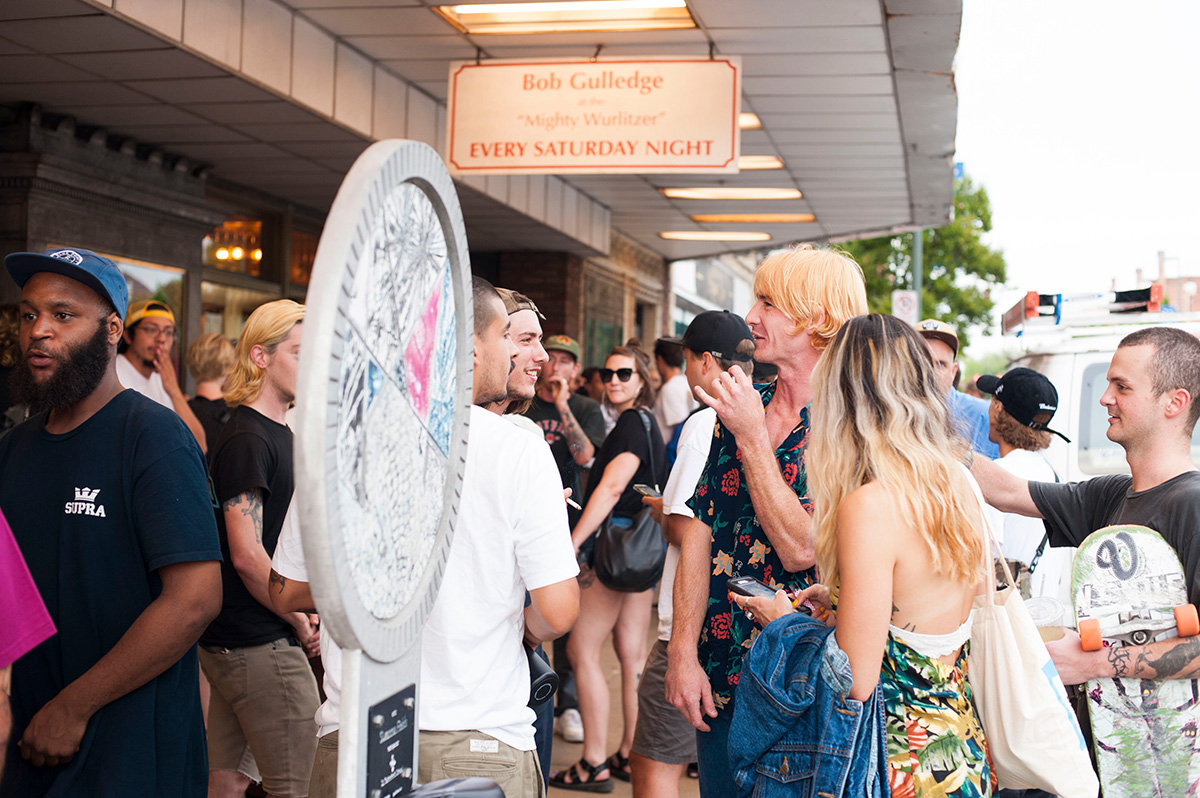 What’s the craziest story you have from the filming of this video?

I don’t think I have one story in particular that was too insane but one Sunday we were skating on this really nice school campus and as we were driving out of the gated parking lot I clipped the mechanical gate arm and it broke off of the booth, we frantically jumped out of the van and started trying to fix it but it was completely broken. We were laughing pretty hard thinking about what the security footage must have looked like. I ended up calling the school the next day and paying for the damages because I felt guilty and the place was littered with security cameras so they definitely would have tracked me down, it was really expensive. Another random Sunday we were skating what we thought was an abandoned church when a man came running out really aggressively, he tried to stop my friend from leaving by grabbing his car door handle and got tossed into the middle of a busy highway. A few months later we were in that same town and some cops asked us if we knew anything about the incident. Last one, Jon Rowe’s last trick in his part is on the property of a sketchy troll who had some scary dogs and a golf cart he patrols the lot with. Apparently he never lets people skate there but we asked for one more try and he granted it to us then Jon smashed a glass bottle with his head when he flipped over a chain in the ride out and that’s Country Magic.

Are you worried about incriminating yourself on this one, should we leave this in?

I’m not worried about it, the guy was fine, and I already fessed up to the other crime haha. Maybe just leave the city/state out of it haha. 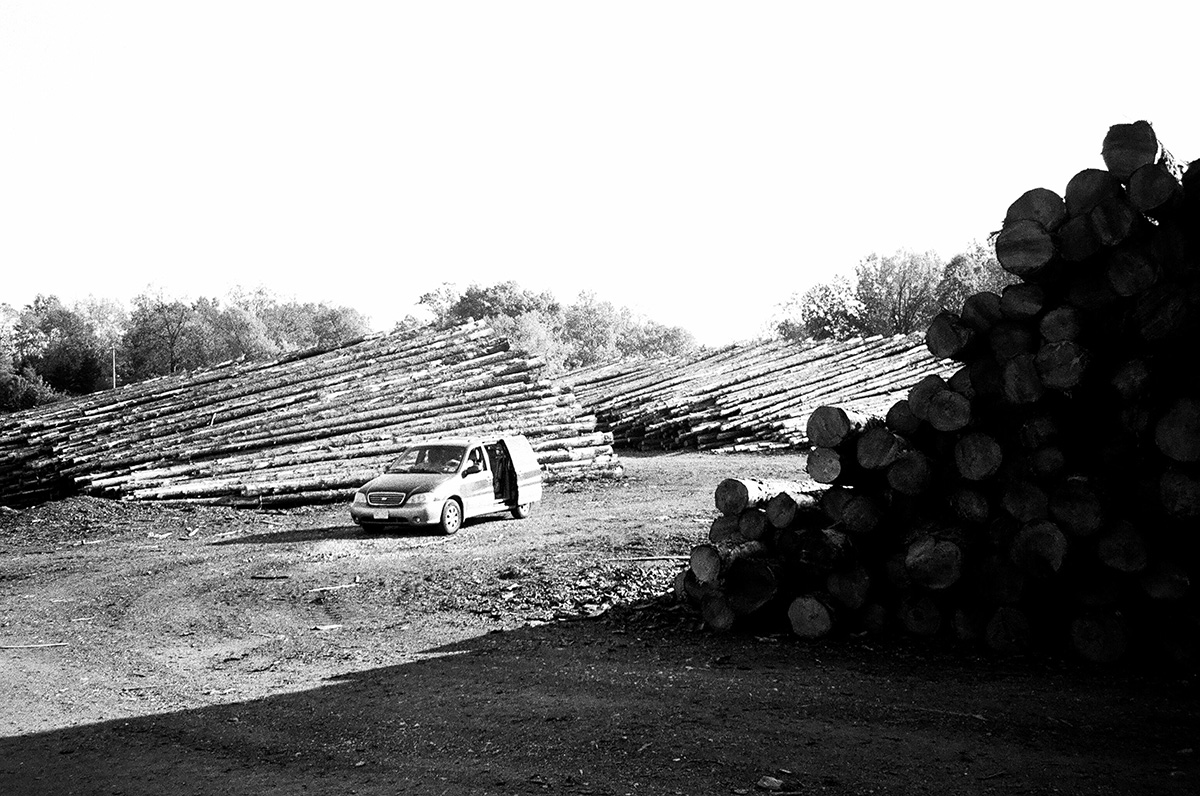 What’s the story on the video name “NIGHTMAREVAN”? How long have you been working on it?

Nightmare Van was originally Jon Rowe’s mini van, the origin behind the name is pretty layered and stupid but once his van was shot I got a mini van and it took over the namesake, we use it for every trip we go on so it made sense to name the video after it. As far as how long this video took, it was exactly 2 years of filming but a lot of the guys came and went and some started filming really late, like Pat and Daniel. Jon filmed for 2 consecutive years and it definitely shows. 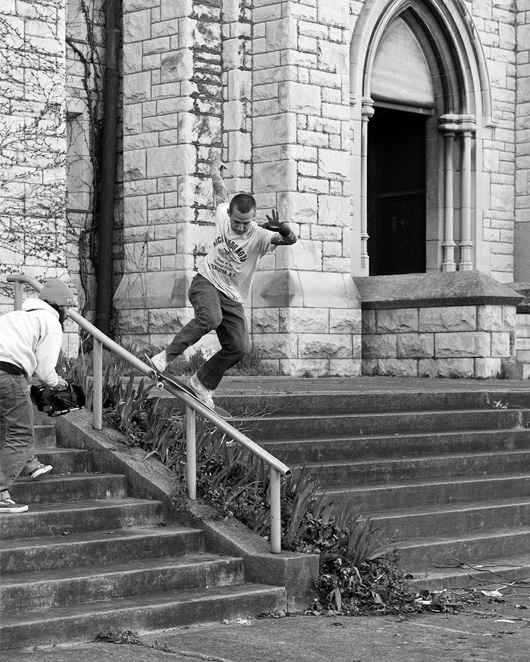 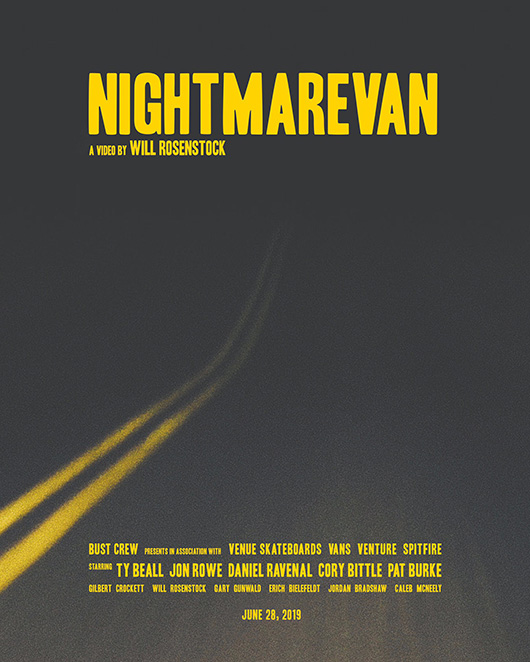 The cover says it all.

What is your role at Venue skate shop, did the shop play a large part in the making of the video?

I work a few days a week at the shop and do most of their instagram posting but yeah this wasn’t a shop video but they always play a large part in supporting our videos.

By the looks of things and all your videos it looks like you and the Bust Crew have a pretty great thing going on out in Richmond, do you ever get the itch to try living/skating somewhere else?

A few of us lived in LA for a year and were collectively not feeling it. Daniel, Ty, and Bittle all lived in New York for a year or so and then moved back to Richmond but now Ty’s back up there again and moving to Tokyo from there he claims, that’s where his wife is from. I can’t speak for the other dudes but I don’t have much of an itch to leave but I’m lucky in that I get to go on Quasi and Vans trips pretty often so Richmond is just a good home base. 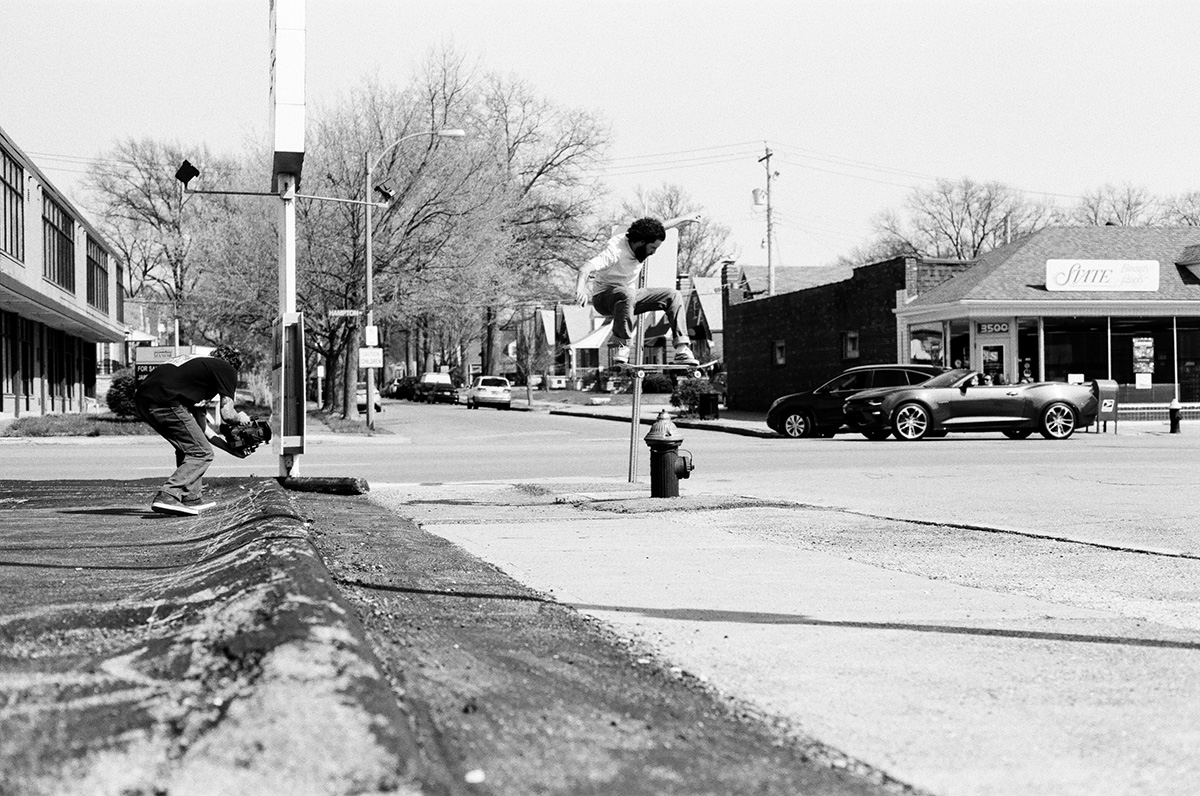 Will wasn’t down for editing his own part, but had no problem hopping hydrants. Photo: Alex Kehoe

So you have a part in the video, is it true that you had someone else edit your part because you felt weird doing it? What was the thought process behind that, are you happy with how it turned out?

Haha, who told you that? I’m sure most people would have a hard time looking at their own footage over and over not to mention editing their own part unless you’re Jamie Thomas. So yeah I got two of my friends, Kevin O’Dell and Paul Young to edit my footage and I told them I’d pick whichever I liked better. I ended up choosing Kevin’s edit because he filmed most of my footage and I felt like the song he picked suited me a little better. I really liked Paul’s edit too though. Love you, Paul.

What’s next for you, on to the next video, anything in the works already?

Working on a Venture clip with the boys, filming with Gil for a Vans part, Pat B for a Slave part, Dane Barker for a Converse part and filming with the Quasi team for whatever we’re making next. Excited about it all.

Any Shout outs you want to give or advice to any local filmer trying to make it happen in their scene?

Advise is tough I could use some myself. Everyone has their own process but I would say you need to genuinely appreciate the people you film with or else you’re probably going to end up making something corny or boring.

Shoutout to everyone at Venue Skateboards, Chad Bowers and Greg Hunt for the opportunities, my girlfriend Aliya and you guys at Deluxe! 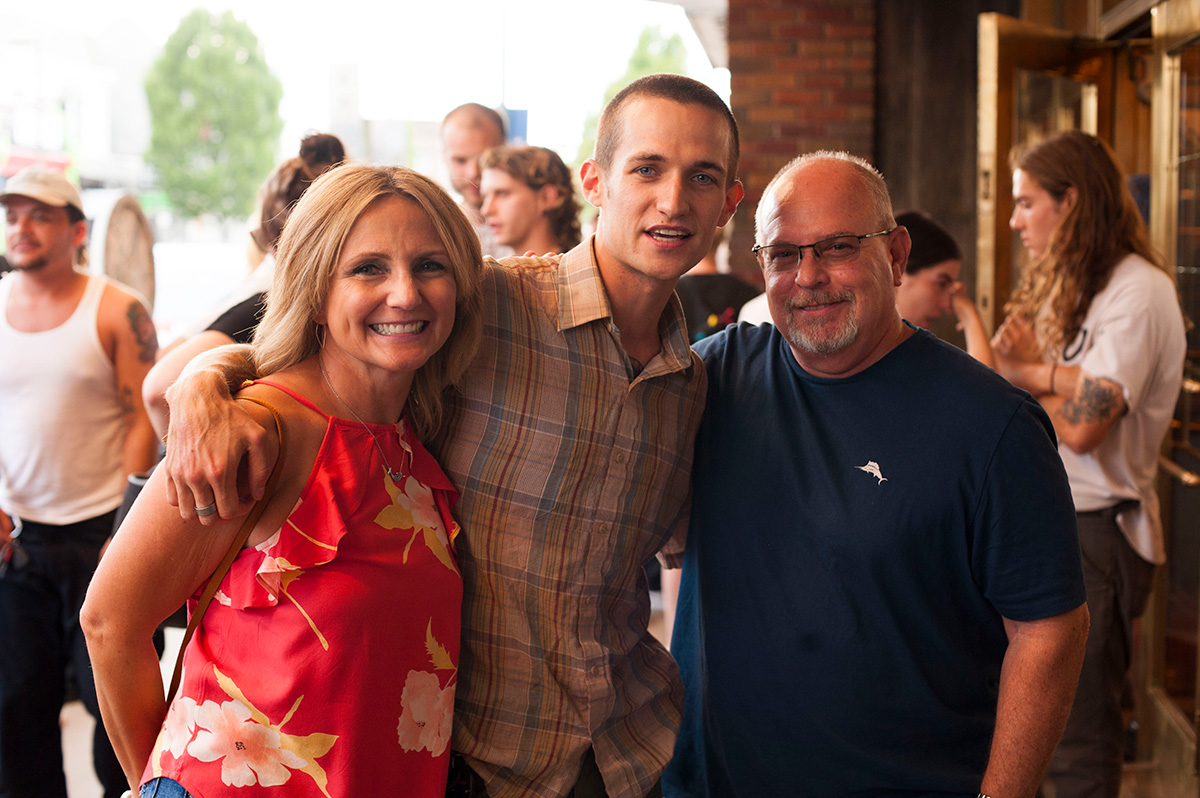 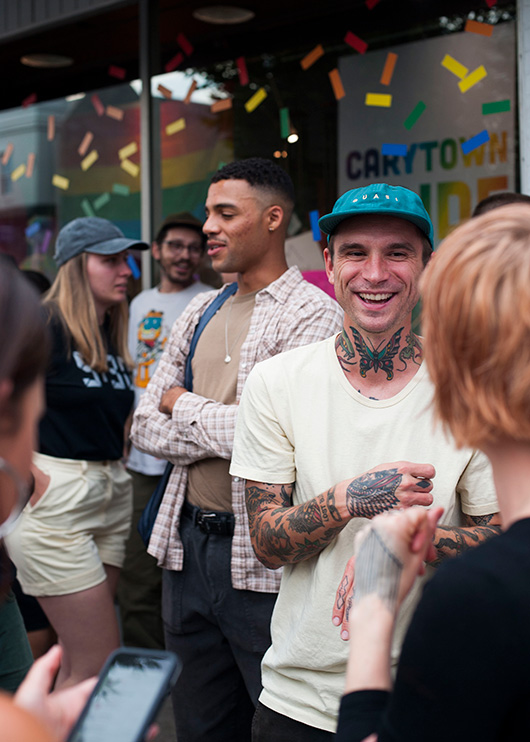 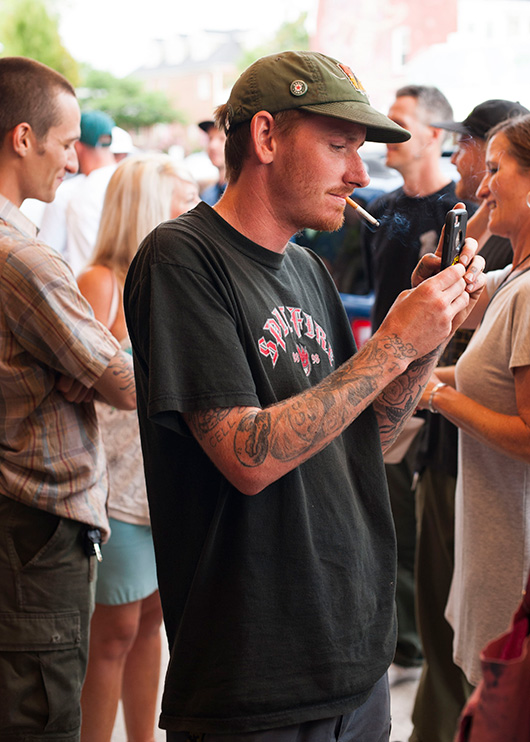